Round 5 of the 2017 British BMX North Region Series rolled into Blackpool on Sunday, thanks to all our club volunteers and the North Region that made it happen. The weather turned out to be a cracker in the end and the track was running nice after a little bit of rain in the morning.

Blackpool riders were out in full force and there were some great results.

Starting in the cruiser classes we had fresh from his double National win in Manchester Wade Agar taking the win, he also took the world record for fist pumping in the Novice trophy presentation. Coach Al Kenyon battled hard with a 4th place in his final just needs to hit that quad quicker before we lip it up again. Jamie Mercer got the dreaded 5th place in the Super Cruiser semi and unfortunately lost his winning streak at Blackpool but got a good solid 2nd in the B Final. Lisa rode 2 bikes with a dodgy finger, she must be mad on that track, and put some good laps in. John Bailey on his new longer frame looked immense in the qualifying motos but just missed out in a tough Super Cruiser Quarter final, those 12 hour days this week caught up with him, more to come from John this season I’m sure. Pam Leak rode great in the Super Cruiser class with the fast boys and definitely won some battles today, there is so much potential in Pam’s riding.

In the Novice classes there were a lot of Blackpool riders battling it out. Twins Kaya and Katie rode their first ever race in the 10 year olds, Kaya unfortunately hit the deck in Moto one so was unable to carry on but Katie rode to a great 5th in the Final. James Topley was flying out of the gate in 12 Year Novice and was unlucky not to make the podium with a solid 4th place, bit more aggression and you will be there. The silent assassin ☺ Jayden Green took the win in Novice 9, this boy is one to watch and Harrison HB rode fantastic and made the A Final.  In the 11 Boys Joseph Ellam took to the podium with a fantastic 3rd Place, keep up the good work Joe. Dylan Copp rode brilliant and was so close to that Podium in the Novice 15’s with a solid 4th place, I think the 1000 laps he did on Saturday in practice might have caught up with him in the Final ☺. The battle of the 10 year olds final was a great race, Ethan Chantler unbeaten in his motos was beaten into 2nd by Josh Capper who rode a flawless 1st berm to take the win. Well done lads great racing in that class. Charlie Leak had a big off in his first race in the 8’s but dusted himself off to finish 4th overall and Ewan Leak in the 9’s picked up a creditable 3rd in the B final he can make the A final if he can find the shortest way round the track next time , get over Ewan ☺. Karla Shorrock was looking swish with her blue tyres and was in with the boys again in the Novice 15’s and rode well. 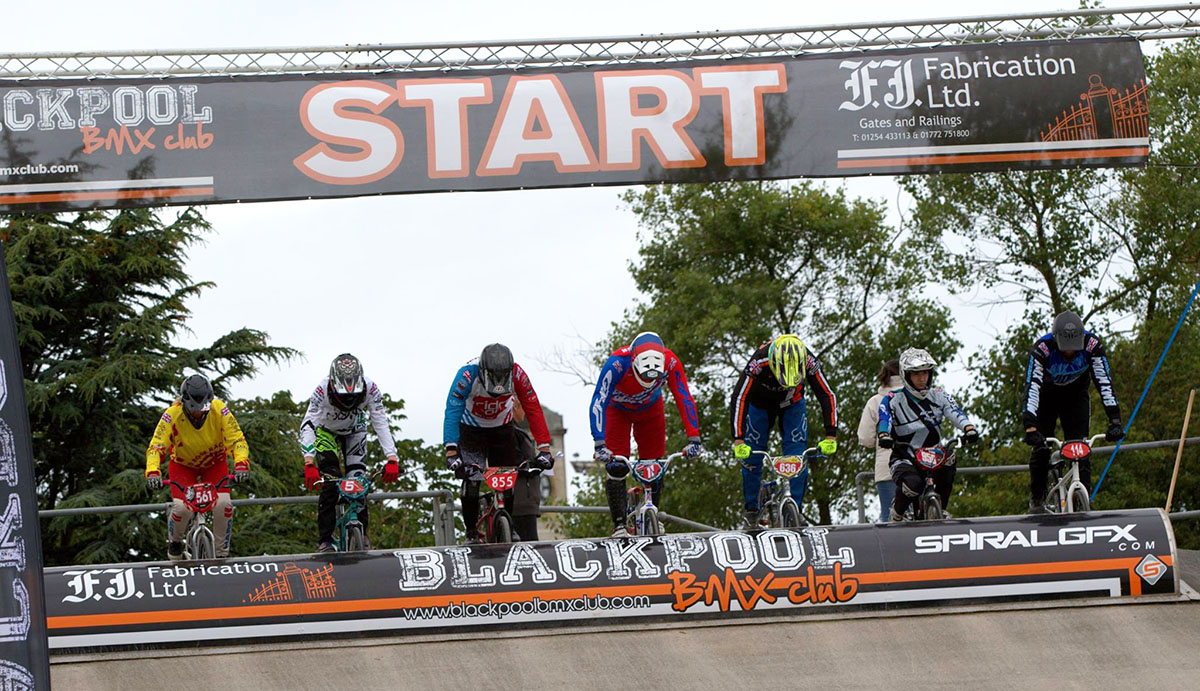 Moving onto the Expert Classes in the 8 boys Caden Done rode steady and made the A Final and Lewis Schofield had a great race ion the B final coming 2nd, transfer that to the motos Lewis and you will be fine. James Bailey just missed out in the A final in a stacked 9-year-old boys class, he had some great moto results and was so unlucky in the Semi, good 3rd in the B final. Cara and Isobel Reidy rode their first Regional in Expert today while their proud Dad watched on as todays starter. Cara had some good solid motos and made the A final in the 9-10 girls with a creditable 7th. Isabel was flying all day and made the A final, unfortunately she went down hard on the first straight but ‘popped up like a slice of toast’ as her sister so eloquently put to finish the lap. Cerys Lund rode steady with a smile on her face in the Female 13-14 class to take 4th.

Ryan Schofield put in one of the rides of the day to make the A final and come in 7th in the mega stacked 11 boys class, great track craft coming through the pack.

We had two riders in the 13 boys class. Robert Ambrose with a fantastic 4th in the A Final , Christian Smith with some good motos but unfortunately missing out on the A, get pedalling Christian! ☺. Another two riders in the 14 Boys class , Dylan Harrison with some great gates today and just missing out on the A with a great win in the B, it will come Dylan keep working hard. Luke Wilkinson taking a hard fought 3rd in the B Final. Moving on to the big boys Carl Leak was flying in the Vets class and took a great 5th place in the A Final , he said he would have done better had Steve and Cuz not been shouting at him from the infield ☺ . In the Championship Ladies class we had 4 riders and there was some great racing, Aimee Hartley was out of retirement and raced her first race and came in 7th in the A final, Molly Cranshaw and Lauren Anyon racing up a couple of year came in 5th and 3rd respectively and Imogen Hill didn’t drop a lap all day taking the win with some great corner moves in the 2nd berm.

So that was the Blackpool Regional, if I missed anyone I apologise, let me know.  It was a great day of BMX racing and a fantastic advert for the sport. Keep working hard and I’ll see you at the next one.